The last two months have been a whirlwind of travel, work, relationships and festivals. After working with Joshua Hanson from Kingdom Promotions, and helping dream of social justice art dealing with the injustices of the for profit prison system in the US, I was quickly off to the UK. I have now spent a week in Caernarfon, Wales, which most people who know me well know is my favorite place in the world, and then I followed that up with five festivals in a row.

So, at this point in the travels through the UK, I have been at HowTheLightGetsIn Philosophy Festival in Hay-on-Wye, Wales, The Hay Festival (in the same town), Burning Nest (a UK regional Burn in Devon), 3 Wishes Fairy Festival in Cornwall (over the water from Plymouth), and Stonehenge during the Winter Solstice.

Desanka has been a part of three of these events. Papy Fisher, Jake Humphrey, and Michael Buchanan were at HowTheLightGetsIn, Burning Nest, and Stonehenge. Jake joined me for the Fairy Festival as well. Along with Desanka, whose work in festivals is growing at an amazing rate, Vicar Diana Dingles Greenfield is doing amazing work in places Christians usually don’t hang out, because she does such a great job of contextualizing the Gospel in the wild and wonderful places most Christians avoid. Along with Papy and Diana, friends such as Andrew Thomas and Stephen Simmons are making God appearances at places like Hay-on-Wye as well.

Please pray for us, and for the momentum of the Gospel in the festival settings. 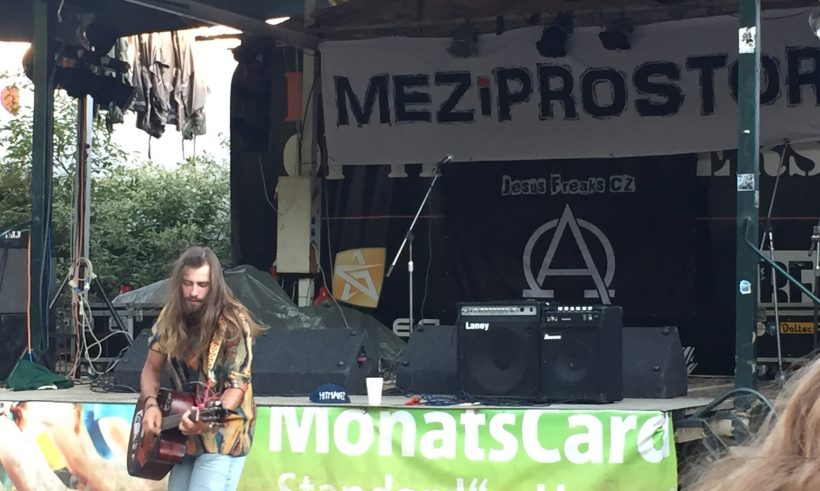 Mid-June through mid-July in the UK and mainland Europe were a whirlwind of activity. From the Summer Solstice at Stonehenge with Christopher Gaston and the Browns from Brownwood, TX, to sleepless same day travel to the 250,000 person Glastonbury Festival, to joining Andrew and Dawn and helping set up/run events/take down for Between the Trees, to flying to Prague for a 4 day heavy metal/punk/hardcore festival called Meziprostor it was a busy month.

This was the third year at the 4-day Solstice Festival and going to Stonehenge with nearly 15,000 people on the Summer Solstice. During the day, Sandi Chai Brown and Christopher Gaston interpreted dreams at the festival, and I occasionally joined them, but more frequently I might have been found discussing life and spirituality with people from around the UK and Ireland. There were a number of faces we have come to recognize, and people with whom we are developing deeper relationships. Many of those we have come to know are following a New Age spirituality filled with hopes of aliens and psychedelic drug use. Please keep these people and this outreach in your prayers.

Dingles Greenfield and the Iona Community. I spent the next four days at the largest, loudest rock festival I’ve ever experienced. We spent our days in the Iona Community camp talking to people about life and God, and sat around the fire at night doing more of the same. We hopped from concert to concert, and joined the hundreds of thousands moving from show to show. This was my first Glastonbury, and I am hoping to return and join the Iona Community in two years when the festival next occurs. They are in a season of developing some new plans for their outreach after 17 years of working in the festival.

I returned to the town of Glastonbury after the festival for a few days. It am hoping that this wonderful little place, which feels so much like being at home in Salem, Massachusetts becomes a wonderful new haunt of creative outreach. The doors appear open, and Diana has been working among the variety of New Spiritualities found there for some time now.

Early July, it was time to return to Cardiff and prepare for Between the Trees – a small music festival in the valleys just outside Caerphilly. Charlie and Becky were back again. After having spent time with them at Burning Nest, once again I helped set up lights for the festival. Charlie was busy moving out of his apartment, so Becky and I became the lighting masters for the festival. I taught a class on poetry writing, performed some music to fill a slot in which someone was unable to make it, and led a well-attended philosophy discussion in the evening. 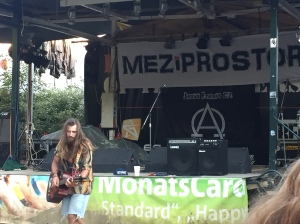 After we worked to take down lights and do the clean up after the festival, I had a day to prepare for the next trip: a train to a bus to a train to the eastern edge of the UK to catch a flight to Prague. After a day in Prague, Sasha Flek took our small crew of Americans out of the city to a festival he has been helping organize for a few years now. Meziprostor is a hardcore/punk/metal festival with a Christian Spirituality edge. I taught on the subject of the changing dynamics of sexuality in our culture (under the title “Uncomfortable Sexual Positions”), played a little more music, led a morning devotional and got to know people as best I could through the often challenging language barriers. I discovered a wonderful set of new friends from Poland and the Czech Republic and hope to return to this event and perhaps to Poland as well next year. Please keep the team that is building Meziprostor in your prayers. This festival has created one of the best environments I have ever seen for Christians and their non-Christian friends to hang out together in a life affirming way.

After Meziprostor and spending a morning with Cathryn Camissa and some of the Jones family and friends, I caught a bus to a train to another 3 trains, and arrived late at night in Kaiserslautern, Germany. In Kaiserslautern, I spent the next few days with Jeff and Barbara Cox. And here life slowed down a bit, and I washed away a month of weariness. I also left Germany with an iPad Pro which the Cox’s donated to me. (Thank you, thank you, thank you! This will make traveling much easier in the future.) After spending a couple days with them, I sat in the airport in Cologne waiting about 5 hours for my late flight back to the UK.

I stayed with Ben and Joanna, my new friends from the Iona Community Outreach at the Glastonbury festival, and had a lovely time with lovely people in Manchester, which is an amazing city. I am back at Mark and Anthea Searle’s home in Cheltenham now, and will head back to North Wales in the next day or two to start prepping for the Eisteddfod.

I am in the last phase of travel, meeting people, and working in my final festival of this trip – the Welsh National Eisteddfod, where I anticipate a little over two weeks living and working in the Welsh language.