At 8:30am, the Virgin Atlantic flight left Logan airport in Boston for London Heathrow. I had purchased a round trip flight for just over $350 some months previously. It was one of the best prices available this year, and I had booked it through Delta Airlines, but immediately jumped on the tickets when I saw that it was a Virgin flight. I had the row of five seats to myself.* During the flight, I met Kaliko, a man who was born on the Isle of Wight. As a young man he was adopted by a lady in Hawaii. Today he is a fluent speaker and teacher of the Hawaiian language, and an activist for minority polynesian languages. Kaliko and I will be following one another in social media from here on out, and I hope that someday our paths pass again. 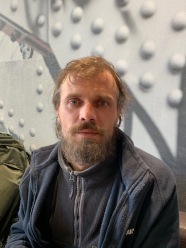 After arriving in Heathrow, I caught the London Underground to Victoria Station, and from there caught a £9 five-hour Megabus ride from London to Liverpool. During the bus ride, I met Alex. Alex is Russian/Lithuanian but has been living in the UK for years. He is currently homeless, and quite happy to be so at the moment. He plans to spend a few months in Liverpool working, and making some money. He has been befriending other homeless, and sharing God’s love with them for about three years. He showed me around Liverpool, and I am hoping to be able to get back there to see him again before I leave the UK in August. 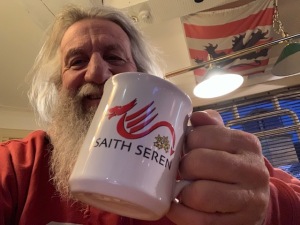 40 hours after leaving the US, I finally arrived in Wrecsam in North East Wales for the Focus Wales event. I stopped at a pub in Wrecsam to get my bearings and try to connect with people I had contacted on the Couchsurfing network. I walked past a place called Saith Seren (Seven Stars), and saw a “Cofiwch Dryweryn” (“Remember Tryweryn”) sign, which was evidence that this could be a Welsh Language Pub. I stopped in, plugged in my computer, spoke to the bartender, who was fluent in Welsh for a bit, and got to work on the computer. After getting a bit of work done, a man came into the pub who appeared to be in charge. He talk with the bartender in Welsh, walked around the room straightening a few things up, and stopped to speak with me in English. I responded to him in Welsh, and his eyes got real big. He asked where I was from, and after a about 10 minutes of conversation in Welsh, he asked if he could take my picture. He took my picture, and unknown to me posted it on Twitter and Facebook with a comment about meeting me, speaking in English, and how I responded in fluent Welsh with a heavy American accent, and said, “Phil is from Massachusetts.” In a short time the post exploded with hundreds of likes and responses from Welsh speakers. For the next two days, people in Wrecsam would recognize me from the picture on Facebook or Twitter, and friends of mine from across Wales would respond to the posts.

That night, I was not able to connect with the my potential Couchsurfing locations on the first night, but that is not something to stop someone like me with a hammock tent. Late that first night, I met Cary. He is a homeless drug addict in Wrecsam, and has lived there his whole life. He showed me around to the hidden “wild camping” locations around Wrecsam, and the spot he has been living in his tent. We talked about what it is like to be homeless in Wrecsam, and the troubles he has with the other homeless who are heroin addicts, and alcoholics. He describes himself as an amphetamine addict, and struggles with the theft, and violence that comes from other addicts.

By the second day I was able to connect with Katherine who had a place for me to Couchsurf in her home right next to Wrecsam’s center. I was one of three couchsurfers at her place. For the next three days, I volunteered at one of the music venues, which was St. Giles Parish Church. In the afternoons and evenings I worked with the small team at Saint Giles, and connected with people from around Wales in the music industry at other times.

I met Faith Owen on the second day. She works in Coleg Cambria in Wrecsam teaching Welsh. Turned out that her husband is a pastor of the Nazarene Church in the nearby village of Penycae. I traveled around with their family on Saturday to see some beautiful locations above the town of Llangollen like the Castell Dinas Bran (Castle Dinas Bran – see photo at the top), the ruins of a 13th century castle that looks down on Llangollen. The next day, I attended their services and experienced a beautiful and friendly group of Welsh believers. 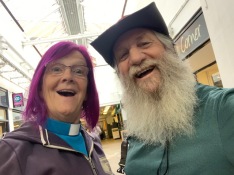 I also spent some time with Dot Gosling, the purple-haired vicar in North Wales. Dot and I had been circling in similar orbits for awhile and finally met face to face.

During this same time, I completed a 5,000 word article for the Church Mission Society magazine, Anvil. The topic was “Spiritual but not Religious”. While I was completing the article, discussions popped up in Katherine’s home. Katherine, her partner Brian, another couchsurfer named Lauren, and I talked at various times about the nature of spirituality and religion. I’m hoping to see them all again in the future, because I had such a wonderful time getting to know them all.

All in all, this time in Wrecsam (“Wrexham” in English) has been fruitful, and relationships were developed with the festival and the greater community of Wrecsam.

* If you ever need help finding cheap flights contact me. I can give you the tips on flying cheaper than you might expect.